Channeling the power of the BUTTERFLY, DotOUT not only embraced change at this year’s Boston Pride, we did it while overcoming half-ton obstacles! 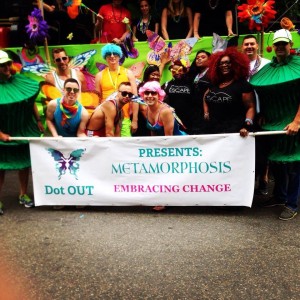 Saturday’s weather began overcast but spirits were high as we met at the unbelievable hour 7:45 am in order to meet the parade’s hour early start time. While no one is feeling particularly pretty at 7:– in the dawn hours, the DotOUT float crew neverless persevered.

With almost two weeks between parades, the DotOUT Steering Committee had a little extra time to tweak (not twerk) and primp the float for the big street’s of Boston.

A special Boston Pride banner was added, glitter was polished and extra sandwiches were made to sustain the float team.

Our float was wonderful, our crew and float committee dedicated beyond glitterable-belief. And, yes, of course the sun came out on the parade, making the day complete.

Check out Pride pictures in our gallery!