Richard O’Mara, one of DotOUT’s founder and longtime Dorchester community leader, once again graciously hosted the largest DotOUT after party to date — with estimates of over 50 to 60 attendees. O’Mara offered guests cool beverages along with his signature Thai Chicken salad, burgers and grilled Portobello/cauliflower side dish.

DotOUT raised $400 from suggested donations that directly benefit a Dorchester charity. DotOUT Treasurer Mark Haley said, “This is the most money we have ever collected at the Cedar Grove BBQ!” All monies collected benefit the intended charity as the event’s food and beverages were provided by O’Mara. 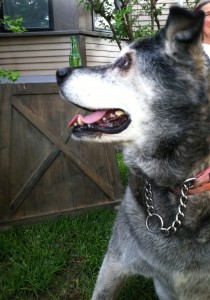 Even O’Mara’s 14 year-old Husky-mix dog, Samantha, joined partygoers on the neighboring lawn, sampling a burger or two from the relaxed crowd.