Lawmakers are stalling on legislation fully protecting transgender Bay Staters from discrimination—and the clock is ticking.

Right now, there is no firm commitment from state lawmakers to bring SB 735 & HB 1577—legislation prohibiting gender identity discrimination in public spaces like parks and hotels—to a vote this year, if ever. 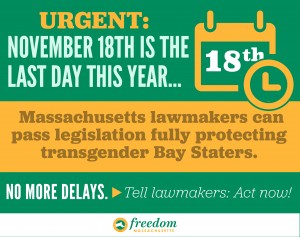 On November 18th, legislators will break for the holidays. If they haven’t brought the issue to a vote by then, efforts to fully protect transgender people from discrimination will likely be stalled until 2017.

We have to keep the pressure on so legislators know: We can’t wait. This legislation needs a decision NOW—not two years down the line.

Contact your legislators now with Freedom Massachusetts and urge them to bring SB 735 and HB1577 to vote before the end of the year.

The momentum is real. In the last 4 months alone, the Boston Chamber of Commerce, Massachusetts Hospital Association, Massachusetts Chiefs of Police Association, the Massachusetts Major City Chiefs have joined with 160+ businesses like Google and Harvard Pilgrim to endorse full non-discrimination protections for transgender people.

We can absolutely pass this bill this year. Never before have we been so close. But we have to get a firm commitment from lawmakers to move SB 735 & HB 1577 forward and pass it before November 18th.

If we don’t, it could be another two years until transgender Bay Staters are fully protected under Massachusetts law.

Massachusetts should be leading the pack. It’s time for our lawmakers to commit to action. Click here to send a message and urge your lawmakers to act now on SB 735 and HB 1577: http://freedomMA.org/NoDelays.