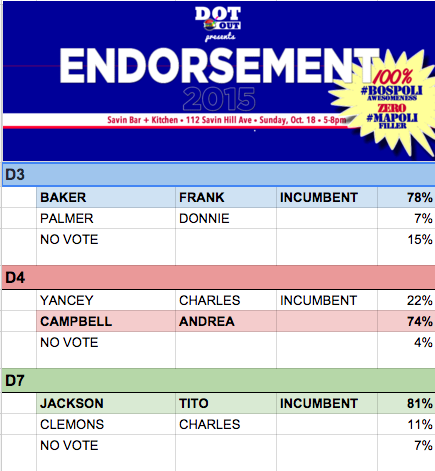 BOSTON, October 19, 2015 – DotOUT members and neighborhood activists heard from eight of the Boston City Council candidates Sunday night. Held at Savin Bar and Kitchen, the open dining space allowed candidates, campaign staffers and attendees to break bread with one another beforehand. David Whitley, the evening’s moderator, kept candidates on point, even as some slid humorous campaign solicitations between timed responses. DotOut Political Committee Lead Christopher Joseph said, “Boston’s heart is in its neighborhoods. Councilors answer to their constituents and can only act locally. But, they also focus on the ‘big picture’ impacting the city. Tonight’s candidates answered complex questions with a neighborhood lens.” By evening’s end, members endorsed seven candidates: four at-large and three district seats for Boston City Council.

“Tonight’s vote shows what happens when people get out and vote,” DotOUT President Chris McCoy said. “Each candidate forum and endorsement night is different. DotOUT members voted tonight with their vision for a more united Dorchester with careful consideration for new candidates with fresh ideas.”