Dorchester’s own LGBT group celebrates a decade of acceptance as change swept through city and neighhorhood. Dorchester Day Committee, parade’s organizers, have welcomed
the local LGBT group’s participation each year since 2004.

BOSTON, June 4, 2014 – Sunday, June 1, 2014 marked DotOUT’s 11th year participating in the Dorchester Day Parade. Dorchester’s LGBT group chose to mark this year’s occasion with the butterfly theme: METAMORPHOSIS-Embracing Change. Celebrating a decade of same-sex marriage and incorporating Boston Pride’s 2014 theme of “Be Yourself/Change The World”, this year’s DotOUT theme focused on how Dorchester has accepted and embraced its LGBT neighbors. 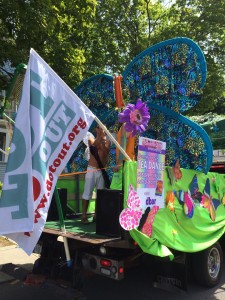 When describing this year’s theme, cycles and physical changes recur. The butterfly’s life cycle — from caterpillar to chrysalis to butterfly — translated into a dynamic float incorporating bright colors and natural, kinetic wing movement. Caterpillar characters with springy, green movement led the flatbed truck driven by D&D Towing of Dorchester. The truck front was decorated with colorful antennae and sported multi-faceted googly eyes over the head lamps. Hanging cocoons and sparkly wings dangled from the truck sides. An eleven foot tall butterfly made out of orange painted PVC and blue patterned fabric flew free from fellow butterfly friends resting atop a shady tree on the truck’s flatbed.

DotOut Steering Committee members Christopher Joseph and his husband and fellow Steering Committee member, Travis Mitchell, have been leading DOTOUT’S float fun for the past few years. The couple even ushered in the group’s “Best Float” win in 2012 with the theme, “The DOT is Right!”  “DotDay and (Boston) Pride have become major annual events for our family, when our house turns into a glittery float factory!,” said Chris Joseph. “It’s been an amazing opportunity to connect with both the gay and Dorchester communities. We are especially proud of DotArt‘s involvement this year. Local kids decorated butterflies for the float, and we think they add a beautiful touch.” This year, the group reached out to the larger Dorchester community to help on this year’s butterfly theme. The float incorporated cardboard butterflies painted (and well-glittered) by the young artists at DotArt and under the supervision of DotArt Executive Director, Liz Carney.

“DotOUT and Dorchester has changed so much–our first time in the parade–which was the centennial parade–there were just 6 or 7 marchers,” noted Stephanie Mouras, one of DotOUT’s founders. “Metamorphosis is right for this year’s theme. We started as a small core of LGBT neighborhood leaders that put in the time and transformed into new leaders bringing new energy, creativity and commitment to Dorchester.” 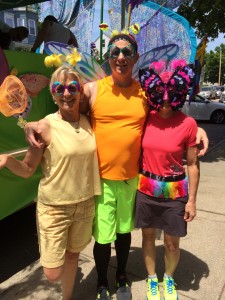 Every DotDay comes with its own set of problems. One of DotOUT’s earliest floats ran into issues with organizing a licensed driver for the float. Mouras recalled, “The group was racking its brain!” Mouras remembered telling the float group, “ ‘Hey, my neighbor drives a school bus,’ and they said, ‘Go ask him!’”

“I was so nervous explaining to this neighbor I only knew casually that it was a gay and lesbian float,” as Mouras continued, “But, you know what, he had a big smile on his face and said, ‘Sure. OK. No problem!’…I was amazed! He and his cousin, who rode in the cab beside him, had so much fun honking and waving in the parade.”

Mouras concluded, “It didn’t phase him at all that he was a straight man from Dorchester and he was driving this big’ ol LGBT float in the Dorchester Day Parade with all his neighbors and family waving from the sidelines.” 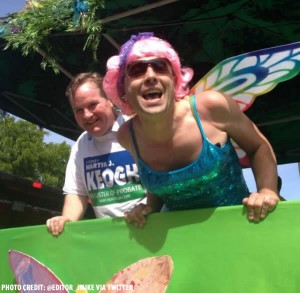 This year’s float issue had a different tone to it. DotOUT’s sound system was unusually quiet early on in the DotDay Parade, provoking parade goers to shout, “Where’s the music!” The surprising two-week break between the DotDay and Boston Pride parades allowed the float organizers to resolve the sound issue with firm promises there won’t be a silent moment during next Saturday’s parade. 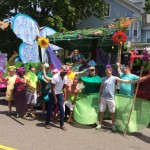 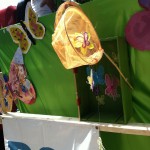 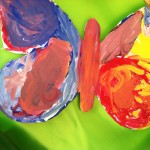 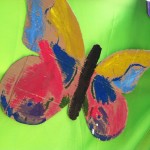 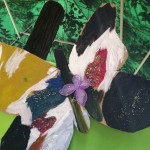 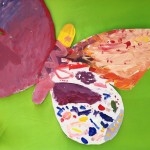 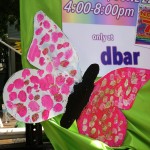 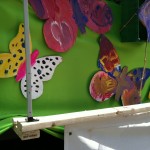 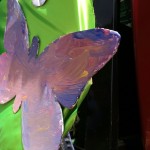 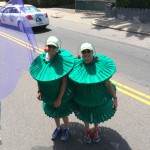 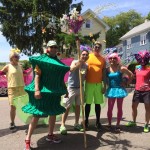