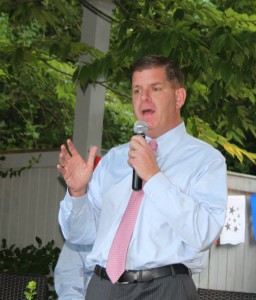 “All of the candidates have a history of supporting LGBTQ issues,” DotOUT President Chris McCoy commented. “We heard their support at the beginning of their campaigns and we’re seeing it tonight at the Carney—they made the extra effort during the last days of the race to meet with our members. Their commitment to our issues is sincere.”

Bay Windows posted both mayoral candidates LGBTQ platforms on October 16. One DotOUT member said having DotOUT endorse three female candidates, referring to Essaibi-George, Pressley and Wu, was the highlight of the evening for her.

The Dorchester Reporter noted Walsh was leading the mayoral candidates with high-level endorsements. “Endorsements, even ours, are just one small part of the political process,” replied McCoy. “It’s not enough saying you support a particular candidate, you have to act on it in November. Our members act—they came out tonight. They will be at the polls on November 5.”

While a quieter affair than the group’s mayoral forum in August and their April endorsement meeting, one of the night’s organizers pointed out some familiar faces. Senator Linda Dorcena Forry (D-First Suffolk) and Representative Dan Cullinane (D-12th Suffolk) were mingling with members and candidates earlier in the night. “Sen. Forry had received the group’s endorsement earlier in the year against Representative (D-Fourth Suffolk) Nick Collins and Rep. Cullinane has been a strong supporter of DotOUT the past year,” McCoy noted.

McCoy summed up the evening’s voting, “Yes, DotOUT members are committed to their own corners of Dorchester, but we know we’re not an island. If Dorchester is to prosper, all of Boston has to prosper. Our next mayor and city council members need to be committed to making all neighborhoods safer and more financially stable. DotOUT members voted resoundingly for Dorchester natives Walsh and Essaibi-George, but I firmly believe they did so with their ‘Boston’ hats on.”