As Boston’s only LGBT neighborhood group, DotOUT has long focused on political activism as a cornerstone of its mission. Many of the founders and original group members were already involved in Dorchester civic and neighborhood groups before coming together under DotOUT in 2004. They used local political activism as one means to create bridges between Dorchester’s communities.

One interesting fact about DotOUT is the membership votes on the endorsement, not the group’s steering committee. DotOUT members have strong ties to their neighborhoods and civic associations and can be seen throughout the year at assorted fundraisers and city or statewide political gatherings.

The Dorchester Reporter has followed DotOUT’s progress over the years and has commemorated some of the group’s more memorable endorsement events. Here are a few from their archives: 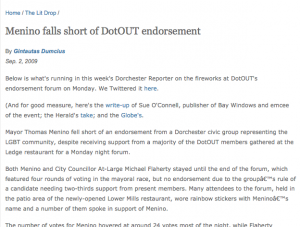 Coming from another persepective, Bay Windows had another take on the evening: 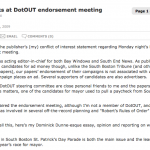 One thing is for sure regardless of the outsome: DotOUT members will have their say!
Read our past news releases for another perspective here.