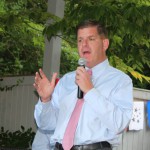 BOSTON, August 7, 2013 – Retiring Boston Mayor Thomas M. Menino leaves a 20-year legacy of progressive policies and underlying friendship to the city’s LGBT population. For one of the 12 remaining mayoral candidates, the next four years will entail a need to live up to a living legend in terms of serving the LGBTQ community across all demographics. DotOUT’s Boston Mayoral Candidates Forum will host seven mayoral candidates on Thursday, August 8 from 5:30 to 8:30 p.m. at the Ledge Restaurant in Dorchester’s Lower Mills. NECN’s Emmy Award-winning political reporter Alison King will moderate.

“Boston has an entire LGBTQ generation which has grown-up with positive and wholehearted support from its top-elected official,” said DotOUT President Chris McCoy. “Nowhere else in America has our community been so fully integrated into our neighborhoods’ daily fabric.” Boston has a long history of politically savvy and strong mayors but Mayor Menino is widely known as the first Boston mayor to buck tradition and to decline marching in the city’s once political “must-do” event—South Boston’s St. Patrick’s Day Parade. In July, the Boston Globe reported that all of the mayoral candidates said that they would continue to boycott the South Boston tradition until LGBTQ groups are allowed to march in it. “In Dorchester, the LGBTQ community has been warmly welcomed. We are part and parcel of the Dorchester experience and have marched in the Dorchester Day Parade every year since 2007,” McCoy said. “But, Southie organizers continue to prohibit open LGBTQ groups. That discrimination doesn’t happen in Dot.”

“Mayor Menino was a game-changer in city politics on so many levels,” said Matthew Duffy, Vice President of DotOUT and chair of the group’s political events. “Our members used marching in the South Boston St. Patrick’s Day Parade as the litmus test for a candidate’s stance on LGBT equality. Just five months ago, Nick Collins Representative (D-Fourth Suffolk) replied he has, and would, continue to march while newly-elected Senator Linda Dorcena Forry (D-First Suffolk) said she would continue to boycott the parade. DotOUT members unanimously voted to endorse Sen. Forry.”

DotOUT members traditionally hold an open meeting and endorse candidates running in local elections. Duffy noted the difference with Thursday’s “forum” format versus past endorsement events, “Twelve candidates is a statistical impossibility. We knew our voting members couldn’t reach the needed quorum to make an endorsement. Like everyone else, we’re all waiting for September’s face off for the final two mayoral candidates for Nov. 5.” DotOUT members traditionally endorse candidates running in local elections which impact Dorchester and its residents. Moderator Alison King will ensure the submitted questions and candidates’ answers move quickly, as many of the candidates have additional events later the same evening.

McCoy summed up why Dorchester and DotOUT in particular were an essential part of this history making election, “Dorchester, the largest and most ethnically diverse neighborhood in Boston, is like a cake sliver of the rest of Boston. We give you all of the city’s strengths and weaknesses in one taste. Dorchester residents wear many hats—our issues are more faceted. Boston’s next mayor will need to represent the growing diversity as well as the complex facets. It’s no longer a single-issue vote with our members. We’ve had 20 years of the best and DotOUT members won’t expect anything else from the next mayor.”